Understanding the African Covid-19 epidemics is vitally important, as many African countries are feeling the dramatic economic impacts of the slowing or closing of parts of their economies. It is increasingly important for African countries to assess their own epidemics, and not feel pressured to apply a “one size fits all” approach, no matter who is advising them.

It needs to be said upfront that Africa is an enormous continent, and unsurprisingly the various African regions, and indeed the countries in each, are showing great variability in the spread of this virus. I have selected a few countries in each region to indicate current trends in the epidemic. 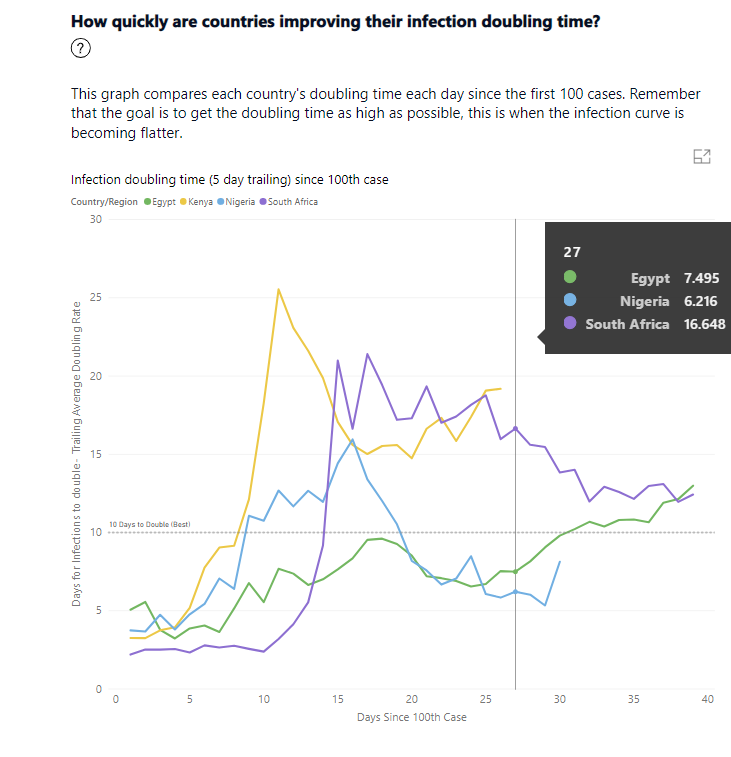 The north African region is, so far, the worst affected by Covid-19. This is unsurprising, given the region’s proximity to southern Europe, where the epidemic has been raging. While the epidemic in Egypt is quite advanced, other countries in the region also have a large number of cases.

This region seems to be experiencing moderate epidemics, which are, however, quite slow-growing.

The west African region is seeing some countries with the continent’s highest number of cases.

This region seems to be experiencing mild epidemics, which are growing at a moderate rate. However, Nigeria’s infection doubling time must be a source of great concern, since an explosive epidemic in Africa’s largest population would be potentially catastrophic.

In east Africa, Djibouti is the only country with more than 1,000 infections, at 1,023, followed by Somalia at 436 infections. However, the table shows the most populous east African countries.

Covid-19 cases in southern Africa are predominantly found in South Africa, which along with Egypt, has the continent’s worst epidemic. Outside of South Africa, however, the region has not been much affected by Covid-19. This is shown by the low number of cases in the other large Southern African countries, Zambia and Angola.

South Africa has a moderate epidemic, although one which has not yet strained the health system. Initially, it had mainly imported cases, and only in the last few weeks has started to see the significant local transmission. Other than island states like Mauritius, the rest of southern Africa has been barely affected by Covid-19 so far.

It is worth pointing out that in the countries which have had severe and explosive epidemics, like Italy, Spain and the US, the doubling time in the initial few weeks was between two to four days. We have not seen a pattern like that in any African countries so far.

The question needs to be asked, why has Africa so far been spared the worst of Covid-19? Are we not testing enough people? Is this a seasonal phenomenon? Are Africans somehow resistant to the virus? Is it simply a question of the age of the population? While it is too early to have any definitive answers to these questions, it is important to try and understand the patterns we are seeing now, since they could inform the level of responses needed to respond to this epidemic.

Often in infectious disease epidemiology, we consider the impact of a disease being due to three dimensions:

The one big issue here is testing. The laboratory infrastructure in Africa varies, but overall is more limited than in many other regions. However, more than 44 African countries can now test for Covid-19. The main argument against fewer cases in Africa being due to limited testing is the lack of patients requiring emergency care. This is a disease which causes severe respiratory distress in a significant percentage of infected people, and we have not seen this being reported so far. So, a lack of testing seems an unlikely reason for the low number of cases.

Other possible environmental factors include seasonality and the density of the population. Since much of the continent is in the Southern Hemisphere, and Covid-19 is a respiratory virus, it is feasible that we will see the worst of this epidemic in the winter months from May to August. This is the norm for seasonal flu epidemics. This remains a very real possibility, although the case of Brazil, another Southern Hemisphere country, would suggest otherwise. Brazil has more than 64,000 cases and 4,000 deaths from Covid-19, which would suggest that seasonality may not play such a large role in the spread of this virus.

Likewise, population density seems an unlikely explanation for the slow progression of the epidemic in Africa. While much of the continent is rural, more than 40% of Africa’s population now lives in cities, many of which have high population densities. It is possible though, that it may take more time for imported cases to spread widely in the population, as a result of the separation of international travellers from the wider communities.

Coronaviruses are a large group of viruses, usually responsible for the common cold. On 7 January 2020, the Chinese authorities reported the cause of a new cluster of pneumonia cases, identified in Wuhan, as a novel coronavirus (Covid-19). The virus has an RNA sequence that is very similar to the Sars and Mers coronaviruses, which caused more severe disease but were less transmissible.

There is no evidence at this time that the version of Covid-19 circulating in Africa is any different to that in Europe or North America. Coronaviruses are relatively stable, and mutate more slowly than the influenza virus, for example. There is nothing to suggest, at present, that the virus has mutated to a less transmissible or a less virulent form in Africa, compared to other regions.

Are Africans less susceptible to Covid-19? This is an intriguing possibility. We know that, during the 1918 Spanish Flu epidemic, younger people were more susceptible, possibly because older people had already been exposed to a similar virus. There is no evidence for some form of immunity among African populations, although it remains a possibility. Some have suggested routine administration of BCG (TB) vaccination may be the reason for this protection, although this awaits further investigation.

Genetic features among Africans which confer protection against Covid-19 is also possible, but unlikely. African Americans have been particularly severely affected by Covid-19. This is almost certainly due to socio-economic factors, and the prevalence of underlying conditions, but would seem to suggest that Africans do not have a genetic factor protecting them.

So, what are we to make of the African Covid-19 epidemics? I remember all too well the start of the HIV epidemic, when the World Bank, among others, predicted the decimation of the African continent. While South Africa, and many countries in Southern Africa, continue to have severe HIV epidemics, most African countries have concentrated epidemics in highly vulnerable populations. Many experts assumed that all country HIV epidemics would resemble the WORST epidemics, and asked countries to respond accordingly.

I worry that we may make the same mistake with Covid-19. It may be that we are seeing a delay in viral transmission, caused by the relative lack of exposure of African populations to this virus, added to a seasonal advantage and the quick responses of many African governments. But it could also be the case that we are seeing different epidemic patterns, which require a different set of responses. Lockdowns are not feasible in many African environments, and we run the risk of imposing severe hardships on our populations, which may also hinder other important health services.

We need to expand the approach of aggressive and active surveillance, and case finding, contact tracing and isolation, since we do not face, at present, overwhelming epidemics. African countries are accustomed to implementing epidemic controls, and we should use all of that experience to develop appropriate African responses to Covid-19. After all, we are likely to have to find ways to live with this virus for at least the next two years. DM/MC

Dr Saul Johnson is the managing partner of the Heath practice at Genesis Analytics. Track the global pandemic on the Genesis Analytics interactive dashboard at https://www.genesis-analytics

This article was published by Daily Maverick on 30 April 2020

Genesis in the News

Is this a blueprint for mass job creation in South Africa?

Tech-enabled future will create jobs for unskilled and reskilled

Creators Rather Than Consumers

Rights for hake deep-sea trawl fishery vital to the economy

South Africans are making a ton of money from Airbnb